Breaking the gender bias – reflections from ICARS staff and collaborators 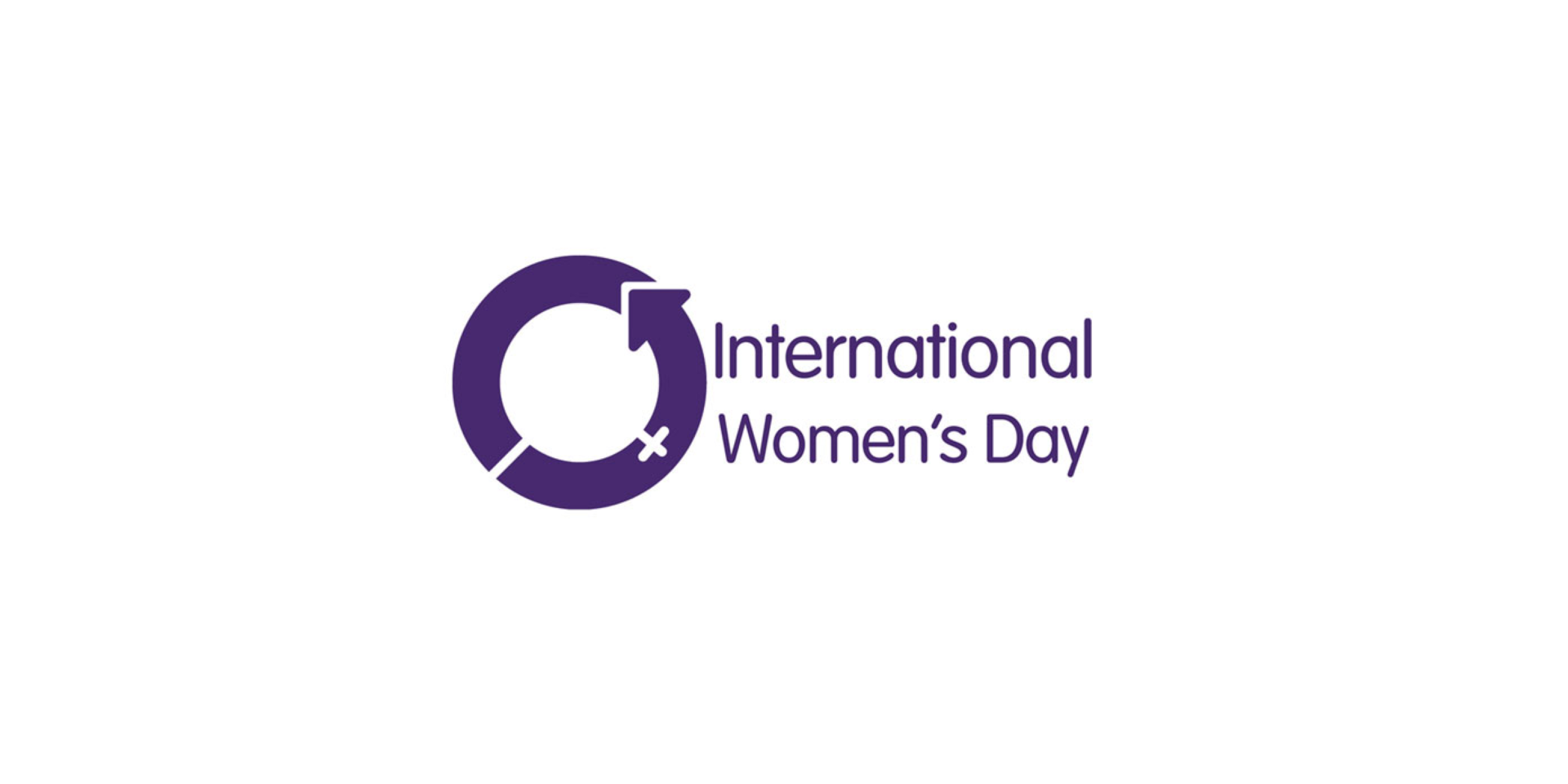 International Women’s Day (IWD) is both a celebration of the achievements of women around the world, and a chance to stop and reflect on the need to accelerate action towards gender equality. This year’s IWD campaign is centred around the theme ‘#BreakTheBias’ to draw attention to the ways that deliberate and unconscious bias continue to limit, block, and restrict women in their day-to-day lives.

Despite gender equality being a recognised priority within the health and development agenda, there have been limited reviews and studies looking at the interplay between gender and antimicrobial resistance (AMR), and even less investigating best practices for incorporating a gender lens in AMR research. To address this gap ICARS and the International Development Research Centre (IDRC) have launched a Request for Proposals (RFP) to synthesise the current evidence and identify priority linkages related to gender and AMR research. The deadline for applications to the RFP (launched on 10 February) is tomorrow, 9 March 2022.

To reflect on this year’s campaign theme, we have asked individuals engaged in ICARS activities around the world, how they have experienced bias, discrimination, and stereotyping in their professional and personal lives, and what they do to overcome it. These insights remind us that we all have a role to play in challenging gender bias in ourselves, our communities and places of work. 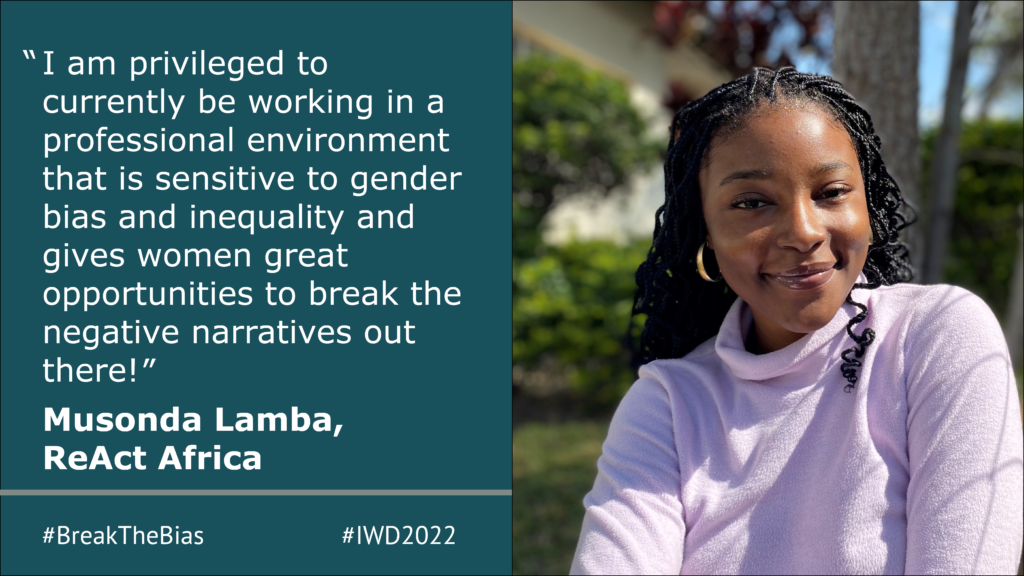 As a Communications Officer for ReAct Africa, Musonda is involved in our collaborative project which aims to develop and disseminate practical, context-specific guidance and applied tools that will support National Action Plan implementation in low- and middle-income countries (LMICs), with a focus on the African context.

“Gender unfortunately influences many aspects of my daily life. Personally, I have stood up to any identified gender bias when it happened in my presence by respectfully calling out the bias and using those opportunities to raise awareness. I am privileged to currently be working in a professional environment that is sensitive to gender bias and inequality and gives women great opportunities to break the negative narratives out there!” 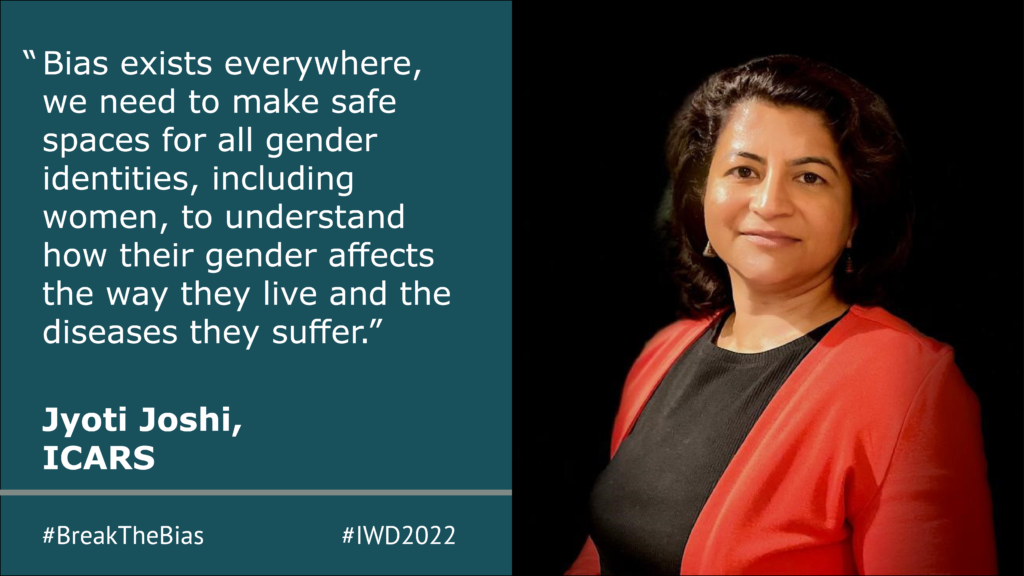 As an AMR advisor at ICARS, Jyoti works with partner ministries to ensure actions to tackle AMR are tailored to local contexts and effectively implemented. Jyoti worked closely with Erica Westwood (Implementation Research Advisor) to develop the gender and AMR Request For Proposals (RFP), in partnership with IDRC.

“Working on the AMR and Gender RFP made clear that we must bridge the gap between these two isolated research areas if we are to achieve meaningful behaviour change at the community level in different contexts. Of course, bias exists everywhere, we need to make safe spaces for all gender identities (including women) to understand how their gender affects the way they live and the diseases they suffer. I am interested in not only how gender bias contributes to AMR; but also, how we can tackle this bias to make more equitable research processes. Women are changemakers and critical mobilisers for action to improve health around the world.” 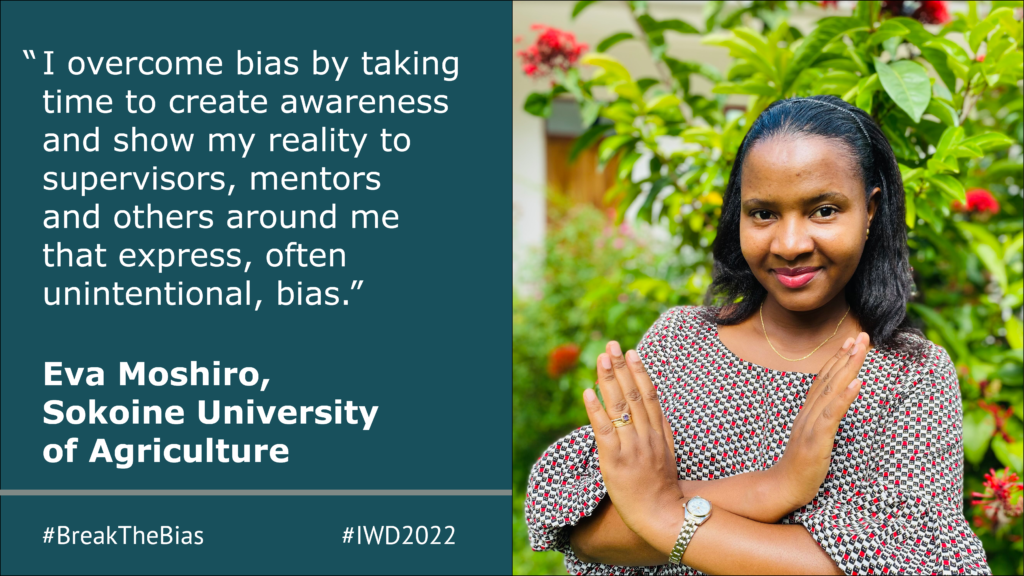 As Research and Project Administrator at Sokoine University of Agriculture, Eva is involved in the co-development of two demonstration projects to tackle AMR in both the animal and environment sectors in Tanzania.

“As a woman who is educated, employed, an entrepreneur and a mother I face as lot of challenges – particularly related to bias. I overcome this by taking time to create awareness and show my reality to supervisors, mentors and other around me that express (often unintentional) bias. I find that building awareness, practicing mindfulness, and embracing our differences can help us to reach common goals. I am prepared to work twice as hard as men if that is what it takes to be successful and for my efforts to be recognized because ‘I am more than conqueror.’ Today I call on all women around the world to apply a ‘yes we can’ attitude, together let us broaden our opportunities and break the bias.” 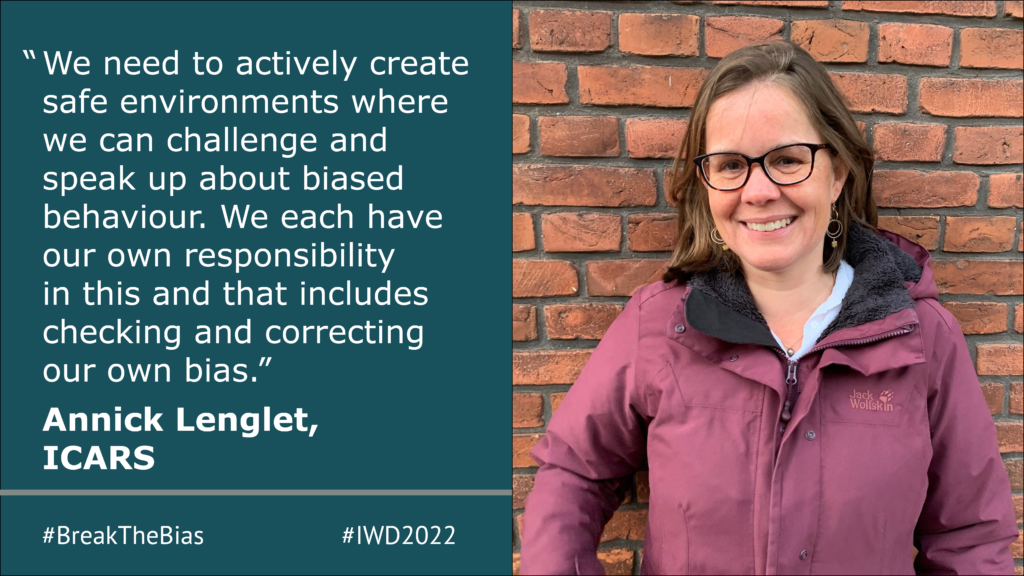 Annick is an AMR advisor at ICARS who works with country teams to ensure project proposals are technically sound and methodologically robust, as well as supporting partners in their implementation.

“Throughout my professional career, I have often been caught off guard when I felt clearly singled out or professionally undermined by colleagues for being a woman. I often require multiple hours or days to process such occurrences and often feel upset and angry that I was ‘too slow’ or intimidated (e.g. by the seniority of the person) to call the behaviour out in the moment in which it occurred. We need to actively be creating safe environments where we can challenge and speak up about biased behaviour. We each have our own responsibility in this and that includes checking and correcting our own bias.” 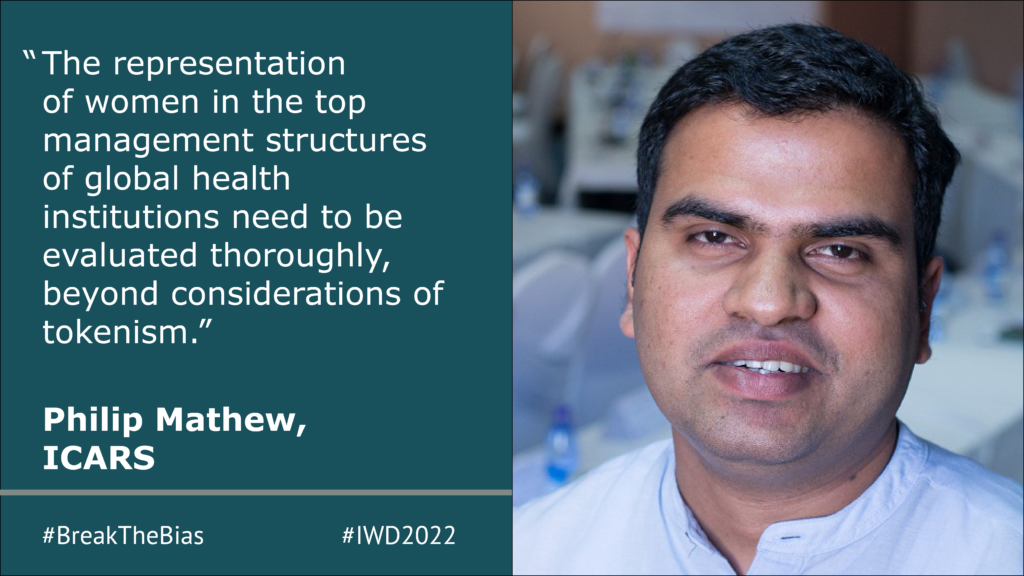 As an AMR advisor at ICARS, Philip is responsible for the co-development of implementation research projects with partner ministries in LMICs.

“Coming from a South Asian country, I feel that some of the gender norms and biases are built into your psyche right from the childhood. Many of the stereotypes and institutionalised discrimination of women are glossed over by cultural arguments. Even in the global health community, women must work harder to be ‘heard’ and accepted. It is not by accident that many panel discussions on serious public health issues are dominated by men or become ‘manels’. The representation of women in the top management structures of global health institutions need to be evaluated thoroughly, beyond considerations of tokenism”