On 28 September 2022, Gulnara Baatyrova, Kyrgyzstan’s Minister for Health signed a statement of support to ICARS. The ceremony took place at a symposium celebrating the 95th anniversary of Clinician, Scientist and Teacher Mirsaid Mirrakhimov, a scientific father to the country and major contributor to the world’s cardiology.

The statement of support demonstrated Kyrgyzstan’s commitment to join ICARS as a Mission Partner, working to promote the AMR agenda nationally and in their region and collaborating to design and implement context-specific solutions. Speaking about the partnership, the Minister for Health said:

“We are very pleased to participate in the ICARS project which is aimed at improving the rational use of antibiotics and reducing antibiotic resistance because this is one of the highest priority and important problems in Kyrgyzstan. We are also happy to become an ICARS Mission Partner and be part of the global network to fight antibiotic resistance.”

Minister for Health of the Kyrgyz Republic, Gulnara Baatyrova 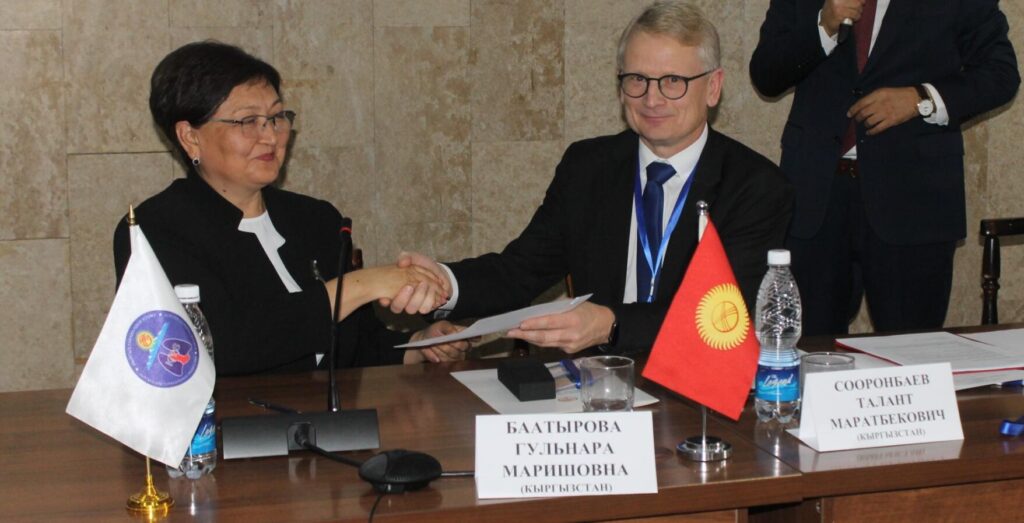 Our first project together was launched in January of this year, with the aim of facilitating appropriate antibiotic use to treat respiratory tract infections in children. Symptoms of respiratory tract infections (RTIs) are the most common cause of contact to the health system and the main reason for antibiotic overuse at the primary care level around the world, as 70% of these symptoms are caused by viruses. In 2020, respiratory diseases accounted for 49.7% of child morbidity in children aged 0-14 years in Kyrgyzstan.

The solution being implemented in Kyrgyzstan uses CRP measurement to assist health care workers to quickly assess whether children with RTIs have a viral or a bacterial infection and therefore need antibiotic treatment. A pilot study results have already showed that measurement of CRP effectively and safely reduced antibiotic misuse, the intervention will now be rolled out on a larger scale including 1000 children from 14 health care centres in two provinces in Kyrgyzstan. An economical evaluation of the intervention will also be performed to provide the evidence that the intervention is not only safe and effective but also cost effective, with a view to national scale-up of the intervention.

While in Kyrgyzstan, AMR Advisor, Dr. Gloria Córdoba , held a series of meetings with the extensive project teams leading the project’s five work packages. The in-person meetings provided a valuable opportunity to take stock of progress made, clarify the complex roles and responsibilities within different packages, and together develop an organigram that captures the dynamic interaction between the complimentary work streams.

Meetings with the Prime Minister and Ministry of Agriculture

Dr. Gloria Córdoba and Scientific Director, Dr. Robert Skov were also invited to two high-level meetings. The first, with His Excellency Ackelbeck Japarov, the Prime Minister of the Kyrgyz Republic, was a chance to discuss the country’s health care system challenges and share experiences. In the event Gloria started by introducing ICARS and our mission to support the implementation of context-specific solutions to curb the development and spread of AMR. Then, Gloria presented the relevance of the current project in relation to some priority areas of development of the country’s health care system, such as the contribution to strengthening primary healthcare and contributing with information on cost-effectiveness and rational use of antibiotics to secure an efficient distribution of resources within the health care system.

ICARS also had a second high-level meeting, at the Ministry of Agriculture attended by the Chief State Veterinary Inspector, the Director of the Department for Policy and Regulations and the Director of the Technical Office. In this meeting Robert Skov introduced ICARS and they discussed potential future projects.

Both high-level interactions made evident the political commitment at the national level to mitigate AMR and we look forward to building on this momentum and hopefully co-developing new solutions in the coming months.